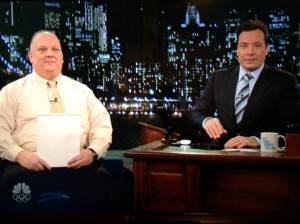 On November 1st, 2013 I officially retired from the ranks of the police department that I had been with for 25 years. In anticipation of this retirement, I developed skills in the field of theatrical set design and construction, and have been very active in my community since 2008 in nearly all aspects of theatre. I design, build and paint sets for our youth theatre, our teen theatre, our Middle School, our High School, as well as out Community Theatre productions. I couldn’t possibly have anticipated how much my being involved in these two fields could have prepared me for a call I would receive the afternoon of November 15, 2013.

I had spent most of the day discussing possible applications of my composite imaging skills within the county I reside with an old friend that has a clue how to navigate the political channels that can sometimes challenge gaining a position from which one could serve most effectively. It had been a good day so far. I had gotten my resume, samples of my work, and most importantly the fact that I didn’t want to stop serving the Detectives in the area just because I had retired, into the hands of someone that I knew cared, and could possibly make some headway. I had just finished texting an update to my wife when the call came in.

The subject on the other end of the line said, hello, he introduced himself, and said that he was from Late Night with Jimmy Fallon, and he asked if I was the Charles Jackson from the web site Forensic Art NJ that he’d found in a Google search. He went on to ask if I would be interested in participating in a segment that required the use of a “real” composite artist. I said that I would be glad to participate, and after determining that I would be able to be in New York City on the day of the taping, he revealed some of the details of the segment . He said that I would be doing a composite from a description supplied by a staff member, of another staff member, and then I would sit down with Jimmy and compare the outcome of the description, and how it compared with the subject described. He said that he would need me to send a picture of myself sometime over the next couple of days, and that I would likely be hearing from the wardrobe people, and a writer that he had “looped in”. I laughed and asked if the fact that I’m kind of ugly would be a deal breaker, to which he responded by kindly saying, “I’m sure you’ll be fine”. I said that it sounded like it was going to be fun, and said that I would see him Wednesday, November 20th at 12:00.

I immediately texted my wife, our friend/director of our Community Theatre projects, and another friend who’s also a Forensic Artist. The content of all of the messages basically boil down to “holy shit, Holy Shit, HOLY SHIT!!!!!!” I couldn’t believe what had just happened, and in fact after I had had a few seconds to absorb the information, I Googled the name of producer that had called just to be 100% sure that I wasn’t being Punk’d!!

When we settled into the idea, we decided that limiting the release of the details of the opportunity might be a good idea, as the plan could very easily be scrapped. All the rest of the day, as well as the following day were consumed in the distraction of our Middle School production of “Joseph and his Technicolor Dreamcoat” and rehearsal for our upcoming production of a new children’s show “Jingle Arrgh the Way”.

On Sunday I received an email regarding some additional wardrobe details, as well as a funny statement in response to the pictures that I had sent saying that “you appear to be a lovely man”. All of Monday and Tuesday I spent gathering things I would need for the show, and trying to get things done like nothing out of the ordinary was going on. I carried on with the strike of the Joseph set, and gathered all of the parts for the next show I would have to set up the day after the shoot, all the while wondering if I could pull this whole thing off.

On Wednesday morning, I saw everybody off as usual, and then started on my journey to NYC. As the day had come without the segment being scrapped, and I was definitely going to go to NYC, I felt a bit better about letting some details out, so I posted on my Facebook page right as I was walking out the door “NYC/30 Rock…here I come!!” and left it at that.

The drive up to, and then into the city was uneventful. Between the GPS, and the studying of Google Maps I had done the previous evening, I was sure I knew where I was going, and got to the Port authority parking garage without any problems. The first problem I encountered was at the roof top of the parking garage, where I found that there was no more parking spaces, and that to leave my vehicle there, I had to use the in house Valet. I watched as other, more experienced appearing folks confidently left their cars in the possession of a stranger, and decided, mostly due to the fact that it was 11:10 that I would do the same and hope for the best.

I walked the 7 blocks to Rockefeller Place without incident, and arrived at the studio 15 minutes ahead of schedule. When the elevator opened onto the 6th floor, I was swept into a torrent of constant movement that would be my existence for the following 6 hours. Due to the fact that Jimmy Fallon is moving to an earlier time slot with the retirement of Jay Leno, his show is being taped in the new studio, while the old studio is being transformed into what Seth Meyers will taping from when he gets started on the new Late Night. There was a constant flow of foot traffic, building materials on fork lifts, and more building materials on large wheeled carts that took up almost all of the hallway when they passed. I was greeted by a wardrobe person, who asked me to have a seat in the hallway while they located the segment producer. There were five of us sitting in that part of the hallway. Two were hired to be the turkeys that would hurl themselves down the steps and then slap each other silly. The other two were hired to play the cops in the segment that I was doing the drawing for. While talking with the others I found that one of the “cops” had been on the previous weeks Saturday Night Live Blockbuster segment with Lady Ga Ga, and that one of the “Turkeys” has been in every one of the live action Teenaged Mutant Ninja Turtle movies as one of the turtles.

After about an hour of wardrobe questions, and adjustments, the producer who had contacted me, arrived and explained that he would be the one supplying the descriptive information. After the turkeys vacated the tiny dressing room available to us, we sat down, he selected all the required facial features, and I set about laying out all of the details of the subjects face in a “base face”. When I showed him the base face, I could see that he wasn’t convinced I was going to be able to get it done, but I assured him that there was much work left to do, and that we hadn’t selected glasses yet. When I had sketched in the glasses details, and shaded the hair and face, he appeared way more confident that the segment was going to be ok and appeared visibly relieved. Having seen the tech rehearsal on the dressing room monitor, I realized that the drawing was going to be set in a side by side camera shot, and again only thought “holy shit”!! At that point I had been in a state of panicked drawing for about an hour, and had become visibly blotchy as a result. Normally I wouldn’t care, but today I was worried that I would look like a knucklehead on national TV, but I had forgotten about the power of makeup.

After the drawing was complete, and I had changed into the cloths that I had brought, we prepared for a dress rehearsal with Jimmy on the set. He practiced some of the other segment pieces, then he started the one that I would be appearing in. The stage manager showed me where I would be walking to and from, and then we ran the “bit” without the real drawing. They wanted to save the real reveal for the taping to get a real reaction. The smiley face that I drew in the place that the real drawing was going to be got quite a laugh. When I left the set, I sat on the side by the producer, and directors, and Jimmy hollered over to me “Chuck, don’t change the drawing now that you’ve seen Brian” to which I responded by simply saying “I won’t”.

Fortunately, I hadn’t been able to see him anyway, and wouldn’t be able to change the drawing even if I wanted to. From where I was sitting on the set, Brian, the subject of the drawing had come out onto the stage and was in profile to where I was sitting, on top of the fact that there was a camera and monitor directly between us. I literally didn’t get a close look at the producer that I had drawn until I was standing directly next to him preparing to go on set for the taping!! We all saw the big reveal together.

The taping could not have gone any smoother, and everyone was very excited by the likeness. The actors hired to come out and arrest the producer were kept a secret from all but a few of us, so it was as much fun  for us to watch as it was for viewers. 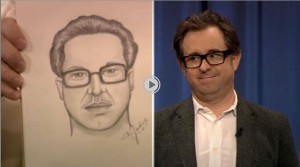 Several people mentioned the look of surprise on my face when the producer that had been described came out onto the stage. The reality of that face was that it was the first time I had seen myself on the monitor and was not happy. The musical guest for the show was a man I had never heard of named Charlie Davis. Mr. Davis had an entourage of about ten or twelve people, one of whom was his cousin who was sure I was there portraying the role of the crack smoking Mayor of Toronto. When I saw myself on the monitor I saw why he thought that and laughed!!

After the taping, I left the set, watched the taping of the show in the hallway until the commercial break, and then changed and started my walk back the Port Authority Parking garage. It was a once in a lifetime opportunity for a guy like me, and a great day. It was also a day that I was able to have some fun, but at the same time demonstrate the value and effectiveness of a hand drawn composite image to a national audience. An opportunity doesn’t get any better than that!! Thanks for taking time to stop a read!!

One thought on “A Win/Win For The Hand Drawn Composite”